The fall issue of Democracy Journal features an essay by Larry on the growing divide between disruptive innovation and technology policy, part of a series on the digital future.

In “Fewer, Faster, Smarter,” Larry argues that the continued explosion of digital innovation has created a public policy crisis for the 21st century.  New regulators are coming face-to-face for the first time with disruptions that challenge decades or more of compromises and cozy relations between government and industries now being reconstructed.

Innovators in the sharing economy, the Internet of things, artificial intelligence, the quantified self, self-driving cars, drone aircraft, digital currency and 3D printing are already feeling the pinch as regulators try to shove round disruptors into square laws, often with the encouragement of incumbents.

Some of these issues may well rise to the surface in the 2016 Presidential elections.  Already, Larry has been asked several times to comment on what the elections mean for Silicon Valley, which candidates best represent technology interests, and how technology will affect the election.  While it is far too soon to answer many of these questions, there’s little doubt that innovators and investors are watching closely–or ought to be!

See also “Silicon Valley is a Political Issue in the 2016 Election” (TechCrunch, August 20, 2015), Andrew Keen’s interview with Larry.  And see ‘Which Presidential Campaign is Winning Over Silicon Valley? ‘None of Them’” (L.A. Times, Sept. 11, 2015), which quotes Larry on the current prospects and their campaigns.

Larry testified on Feb. 25th before the House Energy and Commerce Committee on the future of the Internet and on proposed legislation that would limit the ability of ISPs to manage network traffic in ways that would harm consumers.

A video of the hearing is available, along with Larry’s written testimony.

Last week, I participated in a program co-sponsored by the Progressive Policy Institute, the Lisbon Council, and the Georgetown Center for Business and Public Policy on “Growing the Transatlantic Digital Economy.” The complete program, including keynote remarks from EU VP Neelie Kroes and U.S. Under Secretary of State Catherine A. Novelli, is available below.

My remarks reviewed worrying signs of old-style interventionist trade practices creeping into the digital economy in new guises, and urged traditional governments to stay the course (or correct it) on leaving the Internet ecosystem largely to its own organic forms of regulation and market correctives:

Vice President Kroes’s comments underscore an important reality about innovation and regulation. Innovation, thanks to exponential technological trends including Moore’s Law and Metcalfe’s Law, gets faster and more disruptive all the time, a phenomenon my co-author and I have coined “Big Bang Disruption.”

Regulation, on the other hand, happens at the same pace (at best). Even the most well-intentioned regulators, and I certainly include Vice President Kroes in that list, find in retrospect that interventions aimed at heading off possible competitive problems and potential consumer harms rarely achieve their objectives, and, indeed, generate more harmful unintended consequences.

This is not a failure of government. The clock speeds of innovation and regulation are simply different, and diverging faster all the time. The Internet economy has been governed from its inception by the engineering-driven multistakeholder process embodied in the task forces and standards groups that operate under the umbrella of the Internet Society. Innovation, for better or for worse, is regulated more by Moore’s Law than traditional law.

I happen to think the answer is “for better,” but I am not one of those who take that to the extreme in arguing that there is no place for traditional governments in the digital economy. Governments have and continue to play an essential part in laying the legal foundations for the remarkable growth of that economy and in providing incentives if not funding for basic research that might not otherwise find investors. And when genuine market failures appear, traditional regulators can and should step in to correct them as efficiently and narrowly as they can.

Sometimes this has happened. Sometimes it has not. Where in particular I think regulatory intervention is least effective and most dangerous is in regulating ahead of problems—in enacting what the FCC calls “prophylactic rules.” The effort to create legally sound Open Internet regulations in the U.S. has faltered repeatedly, yet in the interim investment in both infrastructure and applications continues at a rapid pace—far outstripping the rest of the world.

The results speak for themselves. U.S. companies dominate the digital economy, and, as Prof. Christopher Yoo has definitively demonstrated, U.S. consumers overall enjoy the best wired and mobile infrastructure in the world at competitive prices. At the same time, those who continue to pursue interventionist regulation in this area often have hidden agendas. Let me give three examples:

1. As we saw earlier this month at the Internet Governance Forum, which I attended along with Vice President Kroes and 2,500 other delegates, representatives of the developing world were told by so-called consumer advocates from the U.S. and the EU that they must reject so-called “zero rated” services, in which mobile network operators partner with service providers including Facebook, Twitter and Wikimedia to provide their popular services to new Internet users without use applying to data costs.

Zero rating is an extremely popular tool for helping the 2/3 of the world’s population not currently on the Internet get connected and, likely, from these services to many others. But such services violate the “principle” of neutrality that has mutated from an engineering concept to a nearly-religious conviction. And so zero rating must be sacrificed, along with users who are too poor to otherwise join the digital economy.

2. Closer to home, we see the wildly successful Netflix service making a play to hijack the Open Internet debate into one about back-end interconnection, peering, and transit—engineering features that work so well that 99% of the agreements involved between networks, according to the OECD, aren’t even written down.

3. And in Europe, there are other efforts to turn the neutrality principle on its head, using it as a hammer not to regulate ISPs but to slow the progress of leading content and service providers, including Apple, Amazon and Google, who have what the French Digital Council and others refer to as non-neutral “platform monopolies” which must be broken.

To me, these are in fact new faces on very old strategies—colonialism, rent-seeking, and protectionist trade warfare respectively. My hope is that Internet users—an increasingly powerful and independent source of regulatory discipline in the Internet economy—will see these efforts for what they truly are…and reject them resoundingly.

The more we trust (but also verify) the engineers, the faster the Internet economy will grow, both in the U.S. and Europe, and the greater our trade in digital goods and services will strengthen the ties between our traditional economies. It’s worked brilliantly for almost two decades.

The alternatives, not so much.

This week, Forbes Senior Online Editor Kashmir Hill and I launched a new video series, “VC/DC,” where we review the latest developments at the accident-prone intersection of technology and policy. The first two episodes are embedded below.

We’ve envisioned the series as a regular look at the policy issues technology companies and investors should be paying attention to but probably aren’t.

Kashmir and I each bring a unique perspective to technology and policy. A former D.C. resident, Kashmir relocated to the Bay Area a few years ago to cover privacy, security, digital currency and other cutting edge topics.

As a Silicon Valley veteran who now spends nearly half my time in Washington at the Georgetown Center for Business and Public Policy, on the other hand, I am working to bridge the gap between disruptive innovations and the regulators who sometimes love them to death.

The program will cover a wide range of topics, and won’t be limited just to developments inside the beltway. As our inaugural episodes makes clear, we’re also looking closely at how technology businesses are affected by local and international laws, as well as developments in the courts and the legal system overall.

I hope you like the series and find it interesting enough to subscribe.  We’d be grateful for your feedback in any case, as well as suggestions for future episodes. 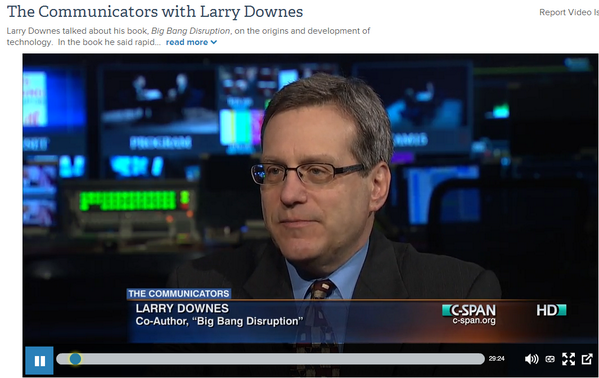 Larry is the guest this week on C-SPAN’s long-running program “The Communicators,” talking with host Peter Slen about the research behind “Big Bang Disruption.”  The program covers a wide range of topics, including the impact of exponential technologies, the fate of incumbents, and the role of regulators in impeding or encouraging disruptive innovation.

Earlier this week, I spoke in San Francisco at an event co-sponsored by the Reason Foundation, TechFreedom, and the Koch Institute.  Hosted by my CNET colleague Declan McCullagh, the topic was “DC vs. SF:  A Clash of Visions for Tech Policy.”

The discussion ranged widely, from copyrights and patents to NSA surveillance to the failure of the government’s Healthcare.gov website.  Although panelists from the political left and right disagreed on some issues, there was as usual widespread consensus that from the standpoint of entrepreneurs and engineers, the core problem in technology policy is that the pace of change for innovation continues to accelerate while the pace of government, at best, remains constant.  Moore’s Law, increasingly, trumps legislated law, often unintentionally, and often with unintended negative consequences.

At the same time, as I emphasized, the shift in commerce, social life, civil life and nearly everything else from offline to online media means that future collisions at the intersection of innovation and regulation are inevitable and, indeed, certain to increase in both frequency and the degree of collateral damage.  Governments claim a monopoly on regulating much of this activity, after all, and like any institution that believes in its own mission is unlikely to let itself go quietly out of business as its markets change.

Governments rely for revenue on taxes. As more traditionally taxable activity migrates online, lawmakers are certain to follow. That’s been true in the development of any frontier, physical or virtual.

The longstanding Silicon Valley approach of ignoring Washington in hopes lawmakers won’t notice what we’re doing was always a dangerous policy, and has now become downright reckless.  So how should innovators engage with regulators?

Watch the video below to find out!

DC v. SF: A Clash of Visions for Tech Policy from Charles Koch Institute on FORA.tv